AZIENDA AGRICOLA BUDIGNAC deals with generations of wine production. Its vines are in Capriva del Friuli in the province of Udine. This is a particularly delightful area for ideal soil elements to grow the vine. In addition it has a microclimate characterized, from spring to harvest, from hot and windy days and cold and dry nights. Ideal terrain also thanks to the optimal exposure of these hilly terraces offering the best of sunshine..

All this is the terroir of Budignacco, the important oasis of Capriva, “Wine town” in the heart of Collio. Area where you can breathe high French oenological scent since 1868.

Indeed, it was in that year that the Count de LA TOUR introduced in nearby Villa Russiz the first transalpine vines. Wine that now characterize the best Collio: white and gray Pinot, Sauvignon, Merlot, Cabernet franc.

The similarity between the name in Friulian Budignac and French is a nice coincidence. This rewards the delightful resort where Tonut operating for generations. 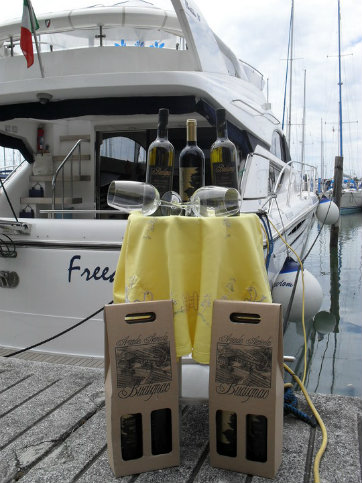 All varieties that young Daniel Tonut, which received a few years from dad Renzo (which since 1959 has given to the vineyards and winery a move substantial ..) of the witness’ company, manages with great capacity and high professional advice entrusted winemaker Francesco Spitaleri.
Next to the vines “universal” Daniel continues the native memory, which dates back to the great-grandfather Domenico (1922) and grandfather Antonio.

Already in 1928 the Tonut produced good Tocai Friulano, Ribolla yellow
Istrian Malvasia (classic Collio) revisited by Daniel according to tradition.
Now there are about 10 hectares of specialized vineyards. Whose production guarantees on average almost 50,000 bottles a year. Bottles destined to domestic and foreign markets. Also to the many wine tourists who are fond of, over time, to Tonut.

This riviera is truly gorgeous for its natural location and genuine hospitality. And it is here that this rural family offers the visitor the wines of Collio.